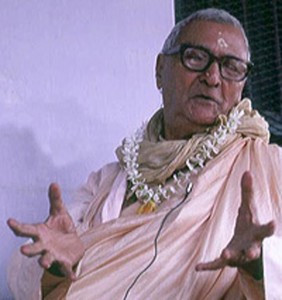 How does the soul first appear in this world? From what stage of spiritual existence does he fall into the material world?” This is a broad question, which requires some background information.

There are two classes of souls, jivas, who come into this world. One class comes from the spiritual Vaikuntha planets by the necessity of nitya-lila, the eternal pastimes of Krsna. Another comes by constitutional necessity.

Generally, souls emanate from the brahmajyoti which is living and growing. Within the brahmajyoti, their equilibrium is somehow disturbed and movement begins. From non-differentiation, differentiation begins. From a plain sheet of uniform consciousness, individual conscious units grow. And because the jiva is conscious it is endowed with free will. So, from the marginal position they choose either the side of exploitation or the side of dedication.

Krsna bhuli sei jiva anadi bahirmukha. Anadi means that which has no beginning. When we enter the land of exploitation, we come within the factor of time, space, and thought. And when we come to exploit, action and reaction begins in the negative land of loan. Although we strive to become masters, really we become losers.

Goloka and Vaikuntha servitors are also seen to be within the jurisdiction of the brahmanda, the material universe, but that is only a play, lila. They come from that higher plane only to take part in the Lord’s pastimes and then return. The fallen souls come from the marginal position within the brahmajyoti and not from Vaikuntha.

The first position of a soul in the material world will be like that of Brahma the creator. Then his karma may take him to the body of a beast like a tiger where he is surrounded with a tiger’s mentality, or to the body of a tree or creeper, where different impressions may surround him. In this way, one is involved in action and reaction. The case is complex; to analyze the details of the history of a particular atom is unnecessary. We are concerned with the general thing: how the transformation of the material conception springs from pure consciousness.

Matter is not independent of spirit. In the brahmajyoti we are equipoised in the marginal potency as an infinite number of pinpoints of spiritual rays, electrons of consciousness. Consciousness means endowed with free will, for without free will no consciousness can be conceived. An atomic pinpoint of consciousness has very meager free will, and by misuse of their free will some jivas have taken their chance in the material world. They refused to submit to the supreme authority; they wanted to dominate. So, with this germinal idea of domination, the jiva enters into the world of exploitation. In the Bhagavad-gita (7.27) it is stated:

“Two principles in a crude form awaken in the jiva: hatred and desire. Then, gradually the soul comes down to mingle with the mundane world.”

At first, sympathy and apathy develop in a crude form, just as when a sprout springs up with two leaves. And gradually these two things help us to dive deep into this mundane world. Upon retiring from the world of exploitation, the soul may return to his former position in the brahmajyoti as spirit. But, if the soul has gathered the tendency of dedication through his previous devotional activities, he does not stop there; he pierces through the brahmajyoti and goes towards Vaikuntha.
Why has the soul come to the world of “exploitation” and not the world of dedication? That should be attributed to his innate nature, which is endowed with free will. It is a free choice. This is substantiated in the Bhagavad-gita (5. 14):

“The soul is responsible for his entrance into the land of exploitation.”

The responsibility is with the soul, otherwise, the Lord would be responsible for his distressed condition. But Krsna says that the soul’s innate free will is responsible for his entanglement in the material world. The soul is conscious, and consciousness means endowed with freedom. Because the soul is atomic, his free will is imperfect and vulnerable. The result of that free choice is that some are coming into the material world, and some are going to the spiritual world. So, the responsibility is with the individual soul.
Once, an Indian political leader, Syamasundara Chakravarti, asked our spiritual master, Srila Bhaktisiddhanta Saraswati Thakura Prabhupada, “Why has the Lord granted such freedom to the jiva ?” Prabhupada told him, “”You are fighting for freedom. Don’t you know the value of freedom? Devoid of freedom, the soul is only matter.” Freedom offers us the alternative to do right or wrong. Once, Gandhi told the British authorities, “”We want freedom.”‘ They replied, “You are not fit to have self-government. When you are fit, we shall give it to you.” But finally, he told them, “We want the freedom to do wrong.” So, freedom does not guarantee only acting in the right way; freedom has its value independent of right and wrong.

Free will is only absolute with the Absolute Truth. Because we are finite our free will is infinitesimal. The possibility of committing a mistake is there. Our first choice was to dominate and so, gradually we have entered the world of domination. As a result of this first action, everything else has developed. So, in different ranks the species have been divided from the demigods down to the trees and stones. And watery bodies, gaseous bodies, anything that we find here has evolved in that way. The activating principle in any form of embryological development is the soul, and from the soul, everything has evolved.”