“O Lord, when will tears flow from my eyes like waves? And my voice tremble in ecstasy.

When will the hairs of my body stand on end while chanting Your Holy Name?” 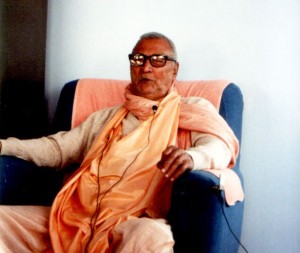 In this verse, the devotee’s prayer has been granted and he has acquired a position in Krishna’s domain. Now his ambition has no end. Although he is posted in a safe position, he is again praying for further promotion. First he apsired only for an insignificant position as the dust under the soles of Krishna’s divine feet. Then, the grant came. The touch of Krishna’s holy feet came to the dust and the dust was converted as if by a magic wand. Now a greater, higher demand automatically comes.

The devotee thinks, “What is this? I prayed only to become the dust of the soles of Your feet, but what do I now feel within me? I am the dust of the earth, and You are the Supreme Absolute Truth. But by the very touch of Your lotus feet, dust has been converted into such a great and inconceivable substance. I wonder, ‘How is it that I have been transformed?’ Now I find that my demand is for greater intimacy. First I aspired for servitude but now, by the touchstone of Your lotus feet, that hope has been converted into spontaneous attraction (raga-marga).”

The King of Affection

Spontaneous attraction can only mean Krishna, not Narayana or Ramachandra. Krishna means “one who is worshiped by divine love and affection.” He is the king of affection, the center of affection and love. The devotee’s whole conception of devotion changed just by coming in touch with Krishna’s lotus feet, and he was graced by the demand for more intimacy; greater love and affection came to grace that servitor.

He was raised to such a plane of dedication that his prayer has changed. He thinks, “What is this? I can’t check my tears. They are coming incessantly, and when I try to chant Your name, my Lord, I feel that I am losing control. Some interference from another quarter is moving me, disturbing my normal thinking and aspirations. I feel I am in the midst of another plane. I am nowhere. I have lost control; I have become a doll in the hands of some other power.

“My aspiration is taking me towards something else. Now I not only want a connection with You as a servitor from a distance, but coming in touch with the magic wand of Your lotus feet, my aspiration has changed. I see that so many devotees are engaged in Your service and chanting Your name, and seeing this, my hopes have been raised.

“I want to be lifted to that position. I can visualise that position from far away, but now my earnest prayer is that I may be raised to that level. Your connection has given me such thirst. I want to be handled by You. Play with me as You like in Your own way. My heart hankers after such a relationship with You. When I chant Your name with this feeling, I find that my previous conception has changed and my new hankering is for the standard of spontaneous love. I pray that You lift me into that plane of Your divine affection and love.”