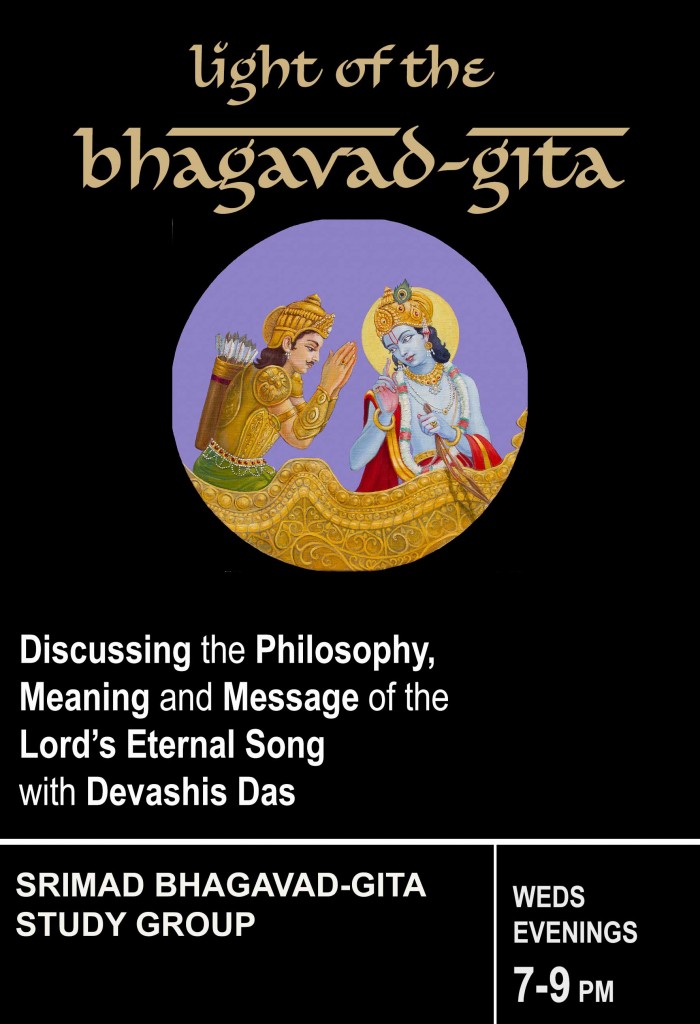 Please find the audio recordings and study guides to our recent Bhagavad-gita  Classes with Devashis Das at the East London Math, at the following webpage: http://scsmath.org/gita/

Annukut is celebrated by the Hindus as the fourth day of the Diwali festival, the day after the main Diwali day. It falls on the first day of the fortnight of the waxing moon, also known as Shukla Paksha, in the month of Kartik.

This is a very special day for the devotees of Krishna, who celebrate it as the anniversary of the day Lord Krishna instituted the worship of Govardhan Hill.

Instead of the traditional worship of Indra, the god of the elemental powers, Lord Krishna persuaded his father Nanda Maharaj to worship Govardhan. On this day the devotees offer Annukut (literally a mountain of foodstuffs) to the Lord and recall His pastimes of lifting the Hill to give shelter to the residents of Vrindavan from the floods sent by Indra to punish them for neglecting his worship.

Here Srila Sridhar Maharaj explains the meaning of this Lila of the Lord: 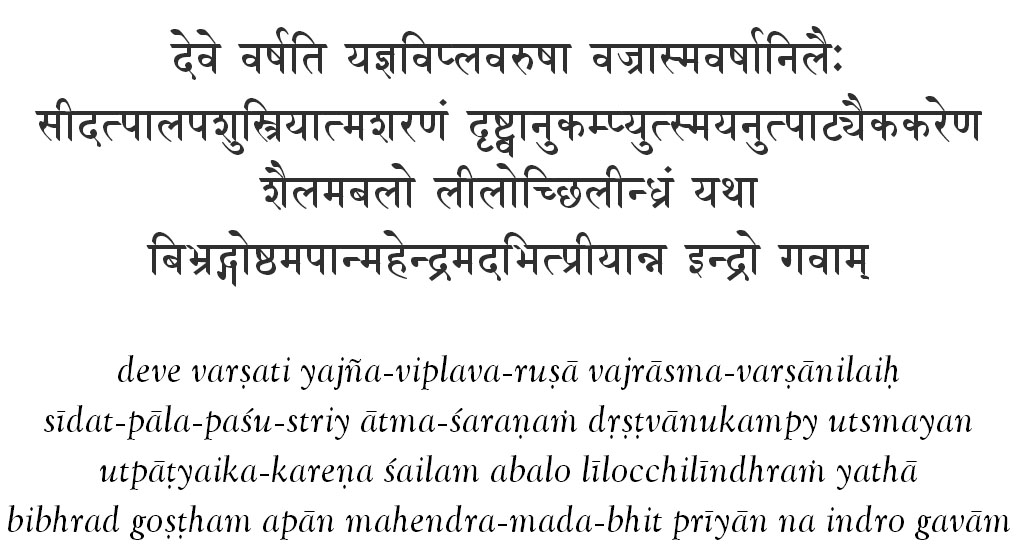 “May that lord of the cows be satisfied by us. Who is Indra when compared to Krishna? Krishna is the master of Indra. And yet He has appeared as the master of cows; the Supreme Absolute Truth has accepted a simple position as the keeper of cows. Superficially, He is a mere cowherd boy. But let that cowherd boy, who holds within Him the power of controlling the whole universe, be satisfied with us. We want to worship that Lord who has taken the humble position of the king of the cows.”

The very gist of the Govardhana lila, the very substance of the pastime, is represented in this verse. The milkmen in Vrndavana used to observe a sacrifice to satisfy the king of heaven, Indra, at whose command the rain, clouds, and other subtle elementary powers move. The main wealth of the cowherd men is the cow, and the cow’s main food is grass. Only rain can produce grass, and so the cowherd men used to perform sacrifice to satisfy the subtle power who is supposed to be in command of natural substances like rain.

By satisfying Indra, favorable rains would come and there would be sufficient grass. The cows could then graze easily on the grass and generate milk profusely. The gopas, the cowherd men and their families, used to make different preparations from the milk, sell them in the marketplace, and in that way earn their livelihood.

As the grazing ground in one place was finished, they would move from one forest to another. Only for the purpose of obtaining grass for the cows, Krishna’s father Nanda Maharaja and the cowherd men would wander from one place to the next. In this way, they lived sometimes in Vrndavana, sometimes in Nandagrama, and sometimes in Gokula.

Once, Krishna wanted to assert Himself and modify the worship of Indra. He wanted to establish His own domain, Vrndavana, in its pristine glory.

Krishna said, “Why should we perform this sacrifice to Indra? We have a direct concern with Govardhana Hill and not Indra.” He announced this idea to the gopas, and somehow, willingly or reluctantly, the gopas submitted to the advice of Krishna. Nanda Maharaja was influenced by affection for his son, and, because he was the king, he told them, “This time we shall worship Govardhana Hill and not Indra.”

And so the gopas, the milkmen of Vrndavana, followed Krishna’s advice—some reluctantly and some willingly—and they began the sacrifice for Govardhana Hill. This news reached Indra, who thought to himself: “A boy of special capacity lives there. Now He has taken the leadership of Vrndavana and stopped this ancient sacrifice to me. For a long time it was the tradition of the gopas to perform sacrifice to satisfy me, and now one boy is the cause of stopping my sacrifice!” He was very much enraged. Indra ordered the clouds and the wind and the lightning to attack the residents of Vrndavana.

According to Vedic understanding, all the elements are personified. In ancient days, the Aryans and Rajarsis, elevated human beings and great sages, used to see everything as persons. They saw everything in a personal way. They thought of the creepers, the trees, and everything  else in the environment as persons. They understood that they were all persons who, according to karma, are wandering through the different species of life.

Once I was asked by a professor of biology about alternatives to Darwinian evolution. I advised him that evolution from consciousness to matter may be understood on the basis of Berkeley’s theory. Whatever we think of is really part of our consciousness. And consciousness means person. Everything that we may be conscious of is a person. We may think of the wind as an inanimate object, but it was thought of in the Vedic line as a person. Lightning, wind, clouds, and rain are all persons. Whatever we consider to be elementary matter, gross and subtle, were all considered by the ancient seers of the truth to be persons.

Indra commanded the wind, the clouds, and the rain to go and devastate the whole area of Gokula Vrndavana. “The residents of Vrndavana have insulted me!” He said. “They have rejected me, have stopped worshiping me, and are instead worshiping that mountain, that hill of Govardhana. I can’t tolerate this insult! Go and devastate them.” By the order and wrath of Indra, the master of all the higher subtle elements, heavy rain began to fall. And so thunder, hail, and rain simultaneously attacked the whole of Vraja Mandala.

Consequently, all the residents of Vrndavana were thrown into a great disaster. Misery, pain, and sorrow afflicted the animals and the protectors of the animals, the gopalas. So the helpless—the women, children, and animals of Vrndavana—had no alternative but to take refuge of Krishna. They all came to Krishna for relief. They cried, “O Krishna! Now what are we to do? You influenced us to stop the sacrifice meant for Indra, and now Indra, being vindictive, has begun to afflict us in this very heavy way. How can we live? Please save us!” They all came to Krishna for protection. Seeing this, Krishna had much pity for them. Being merciful upon them, He smiled a little, thinking, “They have all come to Me for relief.”

At that time, with only one hand Krishna lifted up the Govardhana mountain. For Him, it was a very easy thing; with only one hand, He uprooted the hill and lifted it up as a child lifts a toy ball. And holding up that great mountain, Krishna gave protection to all those who were living in Gokula. The men, women, and children of Vrndavana brought the cows and all their worldly goods and took shelter beneath Govardhana Hill.

The whole cowherd society was given shelter under that hill. In this way, by lifting Govardhana Hill, Krishna gave protection to the residents of Vrndavana, and crushed the pride of the lord of heaven, Indra himself.

And so Nanda Maharaja prays in this verse, “May that lord of the cows be satisfied by us. Who is Indra when compared to Krishna? Krishna is the master of Indra. And yet He has appeared as the master of cows; the Supreme Absolute Truth has accepted a simple position as the keeper of cows. Superficially, He is a mere cowherd boy. But let that cowherd boy, who holds within Him the power of controlling the whole universe, be satisfied with us. We want to worship that Lord who has taken the humble position of the king of the cows.”

From this verse of Srimad-Bhagavatam, we can understand the position of the Lord’s pastime at Govardhana. It is also described here that when the Vrajavasis worshipped Him and engaged in sacrifice for His satisfaction, they saw Govardhana Hill as the Supreme Person, extending His hands, accepting the things offered to Him, and feeding Himself.

At that time, Krishna pointed out, “You see! You thought that Govardhana Hill was only a heap of stone. No— it is living, it is the Supreme Personality of Godhead.” At that time, Krishna revealed Himself as Govardhana Hill and showed how it is also His extended self. According to authorities in our line, Radha-kunda is the extended self of Srimati Radharani and Govardhana is the extended self of Krishna. And so we worship a stone from Govardhana Hill, a part of Giridhari, as Krishna Himself. We may understand from this that a partof the infinite is infinite. And yet so feeble is our ordinary vision that although Govardhana-sila is a part of the infinite, and therefore also infinite, to our material vision it is only a piece of stone.

This pastime shows that a thing may appear to be ordinary stone, but its possibility is infinite. In the general sense, Einstein’s theory of relativity has announced that anything we see is that thing plus something more. In his own scientific way he explains that the reality of a thing includes its possibilities, its prospect—reality is not at a standstill.

Reality is not limited to what is seen or conceived by our senses. Our vision or estimation of anything may be limited, but unknown to us, its prospect may be unlimited. Everything has infinite possibility. We do not even know what infinite possibility a particle of sand may have. We do not know what sort of possibility may exist within a leaf of a plant. It may appear ordinary, but it may contain invaluable medicinal properties.

A part of the infinite is also infinite. The Govardhana-sila represents Krishna as the master and keeper of cows. Within Govardhana is that mild and soft conception of God the Beautiful. We beg for His mercy, His affection, and His gracious glance upon us. That may save us from the negative influence of this material environment. When we try to put a stop to our material form of life and take our course towards Godhead, Krishna consciousness, neglecting the imperative duties that are upon us, so many difficulties may come to trouble us, to trap us in our journey towards the ultimate truth. But if we stick to the order of Krishna, He will protect us. Krishna confirms this in Bhagavad-gita:

He says, “Abandon all other conceptions of duty and just surrender unto Me. Have no fear. I shall protect you and free you from all sinful reactions that might arise from neglecting your ordinary duties.” Different material tendencies and mental impulses may attack us—even Indra himself, the king of heaven and the controller of all ordinary activities, may attack us—but if we are attentive towards our goal, if we are careful to read the order of Krishna, He will protect us in the shade of His lotus feet. He will give us shelter under the shade of Govardhana Hill, where no Indra will be able to touch our heads. And with full faith that Krishna will give us protection, we should try to take shelter under Govardhana Hill and pray: “O Krishna, give me protection from all the difficulties that may come to attack me because of my leaving behind my ordinary obligations.”

Although many anomalies may try to catch us, Krishna will protect us. And in His representation as Govardhana Hill, that wonderful master of the cows will save us from all sorts of difficulties. How is this possible? God works wonders. His ways are unknown and inconceivable.

To watch some of our recent lectures from our weekly Sunday Feast, please visit our BlogTV Channel – DarshanTV London